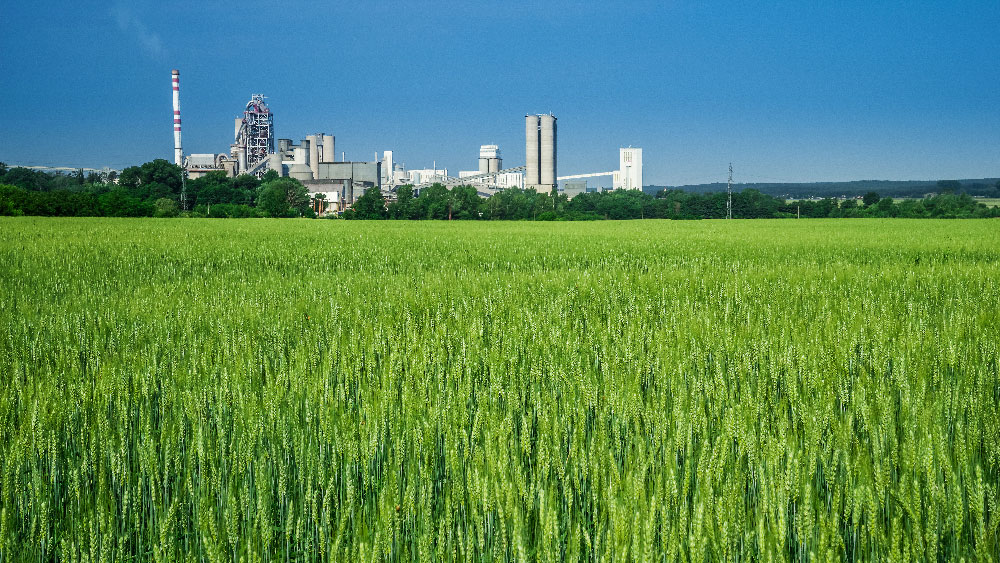 Previous sections have outlined how the cement industry has already reduced its emissions and will continue to do so through conventional resource and energy efficiency measures in the future. Outside conventional technology, one possible breakthrough, long-term solution is carbon capture, whereby CO2 is captured at the source and then re-used or stored.

There are several on-going research projects testing the feasibility of using carbon capture in the cement industry and exploring different ways of capturing CO2.

Using oxygen instead of air in cement kilns would result in a comparatively pure CO2 stream. This technology is still in its infancy and requires extensive investigation. Oxyfuel combustion would change the atmosphere in the kiln and potentially influence how clinker is produced. Current laboratory studies showed that the cement properties remain unchanged from oxyfuel production. An oxyfuel kiln would represent a significant shift in clinker production. However the retrofit of a cement plant with oxyfuel technology seems feasible with a certain effort (e.g. modification burner/cooler etc, implementing air separation/CO2 purification). Nevertheless the planning of a pilot plant still requires some detailing. To capture carbon dioxide (CO2) it is first separated from other gases resulting from combustion or processing. It is then compressed and purified to make it easier to transport and store or re-use.

If capturing a substantial part of CO2 emissions is technically possible, one still has to solve the issue of what to do with the CO2 that was captured. Three possible scenarios are envisaged:

After capture CO2 can be used in a series of processes and industries such as the production of carbonated beverages. However, this offers very limited potential given the volume of CO2 emitted by the cement industry, and the fact that only a very small amount of this CO2 can be utilised by such industries and processes.

CO2 could also be used as raw material in a range of processes that are currently being developed including:

Carbon Capture and Storage, or CCS, is the commonly used term where captured CO2 is transported to an underground storage facility and permanently stored in an appropriate geological formation. This is seen as a last resort and using or creating value with CO2 is preferred. However, the possible quantities of CO2 from carbon capture are enormous and it is not clear if utilisation and valorisation capacities can absorb these quantities.

Carbon capture in the cement industry is still at the research & development stage. In the power sector it is currently being tested at a series of pilot and demonstration plants. Nevertheless, the potential of CCS looks promising. In order to achieve an 80% reduction in CO2 emissions by 2050, taking into account all other measures, and without any other breakthrough technology, 85% of all clinker production would have to be equipped with carbon capture technology, which amounts to 59% of all plants since carbon capture would be deployed at larger plants.

Building new plants equipped with carbon capture technology and retrofitting existing plants will involve substantial capital expenditure as well as significantly increased operating costs. With today’s state of knowledge and based on the current situation, cement produced in a carbon capture-equipped plant seems not as competitive as cement produced in a non-carbon capture-equipped plant. Under certain conditions, like CO2 reuse, abandonment of secondary abatement techniques for NOx emissions or increased alternative fuel use (in the case of oxyfuel), carbon capture plants could become economic.

The exact capital expenditure needed per plant is hard to determine at present, but is estimated to be around €330-360 million to deploy oxyfuel technology at a new 1 million tonne/year plant, about 100 million for retrofitting oxyfuel technology and €100-300 million to retrofit an existing plant with post-combustion technology2. Operational costs of a plant equipped with post-combustion carbon capture technology are estimated to be double the cost of a conventional cement plant, while oxyfuel use would incur 25% higher operating costs. Additional costs would then be incurred for compression, transport, injection and storage. However, it is expected that the cost of CCS will fall in the future with technical and scientific advances, but both increased investment and operating costs will remain substantial.

Finally, carbon capture could be applied in the cement industry only if the international political framework effectively limited the risk of carbon leakage (relocation of cement production to countries or regions with fewer constraints).

Capture technologies can only be useful if a full CCS chain is available, including transport infrastructure, access to suitable storage sites, a legal framework for CO2 transport, storage, monitoring, verification, and licensing procedures.3

Captured CO2 is compressed into a liquid and then transported by pipeline or road tanker and shipped to be stored deep underground. CO2 is already transported this way for commercial purposes. A pipeline ensures lower emissions but, to date, there is no pipeline network dedicated to the transport of CO2. If CO2 were to be transported via road or rail tankers, the environmental impact of that transport would also have to be taken into account. Cement kilns in industrialised regions could be connected to grids more easily than plants in non-industrialised areas. However, concentrating production in a small number of large plants is not a viable option from an economic or environmental point of view, given the cost and emissions related to transporting cement or clinker.

CO2 could be stored in depleted gas and oil fields, in deep saline aquifer formations, or injected into declining oil fields to increase the amount of oil recovered, a process known as enhanced oil recovery (EOR). Storage sites are typically several kilometres under the Earth’s surface.4

Clearly, the ability of storage sites to retain injected CO2 is essential to the success of any CCS project. Storage sites would, therefore, have to be very carefully selected and monitored to ensure the highest level of confidence in permanent storage. This means that only specific locations, not necessarily in close proximity to cement plants, could be considered for carbon storage.

Uptake of CCS technology by the cement industry would mean a significant increase in power consumption5. For CCS to make sense from an emissions perspective, additional power requirements would have to be supplied by low or net zero-carbon power generation.

Public awareness of CCS is currently low, and the public has not yet had the chance to form any firm opinion on CCS and its role in mitigating climate change. European, national, regional and indeed local support would be needed to push CCS beyond the research stage. CCS would also require the support of local communities near storage sites to avoid a ‘not in my back yard’ scenario.

Carbon capture is currently one of the most promising new technology options to reduce CO2 emissions in the cement industry and certainly the single solution that will have the biggest impact. However, in order to be able to deploy CCS solutions in the short to medium term, policy support would be needed at several levels, including:

Also, as shown in the model, the implementation of such policies would be essential to enable the cement industry to deploy CCS and thus reduce its emissions beyond the 32% it can achieve by more traditional means.

Decide which cookies you want to allow. You can change these settings at any time. However, this can result in some functions no longer being available. For information on deleting the cookies, please consult your browser’s help function. Learn more about the cookies we use.

With the slider, you can enable or disable different types of cookies: